Get Notified Of New Posts

How to Create JAMB Profile Code 2023

How to Upload WAEC and NECO Awaiting Results On JAMB Portal

Top 10 Dangerously Rich Ibo Men In Nigeria 2022, their biography and Net Worth. The richest Ibo men in Nigeria are not the same noisy individuals whose names and faces are always in the news; they are astute businessmen who have built life long careers in trade and industry, and who are too busy building and managing their empires. 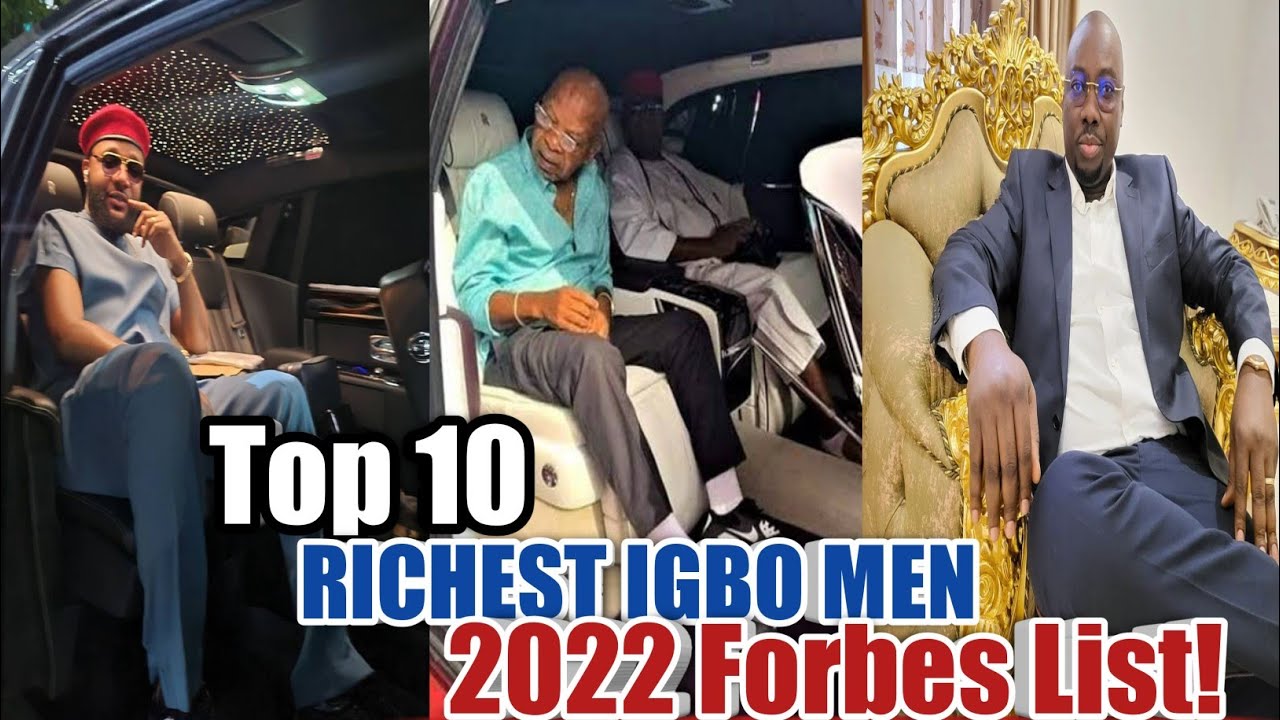 As against the belief that academics is the way to wealth, many of these Ibo men have benefited from the unique Ibo apprenticeship system of ancient days called “Imu Ahia.” By learning from successful businessmen, and by devoting their lives to their enterprises, these men have excelled, and now they are shining examples for the younger generation.

The 2022 rankings are based on the estimation of wealth which is in turn based on the scale of the enterprises held and maintained by these businessmen.

TOP 10 RICHEST IBO MEN IN NIGERIA AND THEIR NET WORTH

Arthur Eze is widely regarded as the richest Ibo man in Nigeria. He is Africa’s foremost indigenous oil producer, and a well known philanthropist. Arthur Eze is the Founder, Chairman, and Chief Executive Officer of Atlas Oranto Petroleum. While this company may not be well known in Nigeria, it is one of Africa’s biggest indigenous oil companies; with business presence in Equatorial Guinea, Sao Tome and Principe, Senegal, Uganda, and South Sudan.

Arthur Eze is one of the most powerful men in Eastern Nigeria; he is a political financier who despite not being openly involved in politics, is frequently consulted in matters of politics and governance.

A foremost philanthropist; he is very much involved in providing succor to the poor and less privileged in the society. Arthur Eze has built schools as well as blocks of classrooms for use by the host communities of his company. He has done this type of philanthropic work in Sudan, South Sudan, Nigeria, and Senegal.

He is a reclusive person; he is known to avoid the camera as much as possible. Nevertheless, the few pictures of Arthur Eze available online show a mild mannered, and easy going man despite controlling an oil empire from his Anambra mansion.

Chief Cletus Ibeto is the Chairman of Ibeto Group; a multinational company which started as a spare parts shop. Cletus Ibeto is one of the richest ibo men in Nigeria, with the resources and the achievements to show for it. He was born on December 6th, 1952 in Nnewi, Anambra State. Nnewi is a small town with remarkable wealth; it has the highest concentration of Billionaires in West Africa.

However, Cletus Ibeto was not born into wealth, he was sent to become an apprentice to Chief Akamelu, who was then one of the biggest dealers in car parts in Nigeria. His apprenticeship was truncated by the war, but after peace was restored, Cletus Ibeto returned to work.

When he started out on his own he moved to Lagos, and opened a small shop. He gradually expanded his operations, and even started importing the goods directly from Europe and Asia. This was where Ibeto made his money; having just received his license to import car parts; the military government effected a ban on importation, meaning that Cletus Ibeto was one of the few who could import car parts.

He confessed to marking up the prices up to 300% due to the overwhelming demand; and thus made more money than he even imagined when he was going into the business. By the time the ban was over, Cletus Ibeto had made so much money that he took the Nigerian business scene by storm.

He started by establishing a manufacturing plant in Anambra State; where vehicle batteries are made. He then added the manufacture of plastic replacement parts such as wipers, bumpers and fenders, as well as fans and fan belts.

Cletus Ibeto established Ibeto Cement, but the company was closed after a disagreement with the Federal Government of Nigeria. In response to the unfriendly stance of the government, Ibeto took his company abroad. He purchased Century Petroleum Corporation – a United States publicly-traded petroleum exploration and production company; thus firmly entering the American market.

Benedict Peters was born in Abakaliki in Ebonyi State on 5 December 1966. He grew up in Enugu State; thus attending Ekulu Primary School, Enugu and Federal Government College Enugu. He also went to the University of Benin, where he studied Geography and Town Planning.

Benedict Peters used his knowledge of geography to great effect; he made research into viable locations for oil exploration, and that gave birth to his astounding success as an oil man. He is the founder and Chief Executive Officer of Aiteo Group, a company in the oil and gas sector.

Aiteo Group is the owner and operator of Oil Mining Lease 29 (OML) and the Nembe Creek Trunk Line (NCTL) in the Eastern Niger Delta. Aiteo Group is one of the largest oil producers in Nigeria; the company also owns one of the largest petroleum tank farms in Nigeria with facilities in excess of over 250 million litres. The company also owns and operates the Abonnema Storage Terminal.

Emeka Offor is the Founder and Chairman of Chrome Group; a Nigerian Company with businesses in America, especially Houston, Texas. Chrome Group is into oil production, as well as the production of oil based products which are sold in Nigeria and on the international market. The Chrome Group also supplies by products of petroleum such as bitumen and plastic.

He is estimated to be worth around 2.9 to 3 billion dollars, and his wealth and enterprises have affected thousands of lives already.

Tony Elumelu CFR, is the most recognizable face among those on this list of the richest Ibo men because he is always in the news. Tony Elumelu is the Chairman of the Tony Elumelu Foundation; which makes him the single largest philanthropist in Africa. His foundation is geared towards establishing the new breed of entrepreneurs in Africa who will guide the continent’s economy in the coming years.

Tony Elumelu is a career banker, he started his career in his early 20’s, and went ahead to establish United Bank for Africa, which he chaired for several years. After stepping down as CEO of UBA, Tony Elumelu went on to establish Heirs Holdings; a diversified investment company with which he invests in ideas, start ups, and established companies.

Tony Elumelu is also the Chairman of Transcorp; a conglomerate which was privatized about 12 years ago. As Chairman of the Tony Elumelu Foundation he oversees a multimillion dollar non profit organization which invests in the future by granting seed capital worth 5 million dollars to be divided among 1000 young entrepreneurs across Africa every year.

Orji Uzor Kalu is a businessman and politician; he hails from Abia state, but grew up in Zaria and Maiduguri in Northern Nigeria. Orji Uzor Kalu is quite a controversial figure; he has a vast business empire, but was still convicted of stealing over 2 billion naira during his tenure as Governor of Abia State.

In his early days he traded palm oil; buying in the eastern regions of Nigeria where the product is abundant; and then selling in the northern regions. He then ventured into furniture; selling on a large scale, also in the north.

Orji Uzor Kalu is also a politician; he was governor of Abia State from 29 May 1999 to 29 May 2007; and then he is currently serving as a Senator representing Abia North Senatorial District.

Ifeanyi Uba is also a politician; he is one of the Uba Brothers who once attempted to control Anambra politics through the back door. He is the senator representing Anambra South Senatorial District in the Nigerian senate.

Ifeanyi Uba was not born into wealth; he dropped out of school at a young age, and then took part in the Igbo Apprenticeship System where he learnt to deal on vehicle tires and spare parts. When he established his business he took it to several countries including Ghana, Liberia, and even Sierra Leone. He is estimated to be worth around $1 Billion Dollars.

Allen Onyema is rising quickly in prominence; he is a very astute businessman who knows how to win the public love and admiration. He is the Chairman of Air Peace; Nigeria’s foremost indigenous airline, which is also one of the largest truly African players in the aviation industry.

Allen Onyema’s air peace came out of nowhere to become suddenly popular; but of course that was after years of planning and building. Air Peace was just ready; which is why its efficient services locally and internationally catapulted the airline to popularity, making it the airline of choice.

To make things even better, Allen Onyema quickly became an ambassador for peace and progress; and also a champion of the people. He transported Nigerian sports teams on chartered flights without any payments. He also sent planes over to South Africa to bring back stranded Nigerians during the height of the Xenophobia attacks.

He is estimated to be worth around 3 billion dollars.

Pascal Dozie was born 9 April 1939 in Owerri, Imo State. He is best known as the founder of Diamond Bank, which has now been acquired by Access Bank. He is also the founder of the Pan Atlantic University. Pascal Dozie’s father was a Catholic catechist, and so he attended Our Lady’s School Emekuku, and obtained his First School Leaving Certificate (FSLC).

He also attended Holy Ghost Juniorate Seminary and Holy Ghost College, Owerri. After that he studied economics at the London School of Economics and obtained a BSc in Economics. Seeing his talent, the British government employed him at the National Economic Development Office in the United Kingdom.

From there he worked as a part-time lecturer at the North Western Polytechnic, London, and then as an economic consultant with the African States Consulting Organization in Uganda. He then returned to Nigeria where he landed a similar consulting job at the Central Bank of Nigeria.

Pascal Dozie established Diamond Bank in 1990, and he was the CEO until 2006 when he handed over to his son Uzoma Dozie.

He is estimated to be worth around 1.7 billion dollars.

Innocent Chukwuma is a Nigerian businessman and entrepreneur. He is the founder and CEO of Innoson Group of Companies; which makes IVM Motors. The company makes cars, buses, trucks, SUVs and such vehicles.

Innoson started with some really expensive models which included armoured vehicles; which were out of the reach of the ordinary person. Innoson has now produced some original vehicle designs including the Innoson Fox, and the Innoson Umu, which have increased the company’s market share.

The company known as the first vehicle maker, and the factory is located in Nnewi, Anambra State, while there are several service stations located in places like Nigeria, Mali, Sierra Leone and Ghana.

The richest Ibo men are different from the boys you see on social media flaunting wealth. People who live such carefree and lavish lifestyles often don’t keep their money for very long. Money takes great care and planning to keep and to maintain, as seen from the endeavors of the men on this list.

who is the richest between obi cubana and dangote